With Nintendo’s recent Direct, it has been revealed that the newest generation of Pokémon will be set in Galar, a region inspired by the British Isles, notably the island of Great Britain, which is composed of England, Scotland and Wales.

This reveal offers a remarkable expansion of the collective history of the Pokémon universe, primarily that of military history.

The existence of military forces is already an established concept in the Pokémon series, ever since the release of the first generation with Pokémon Red and Blue, as Lt. Surge (the Gym Leader of Vermilion City) is mentioned to have served in either the army or air-force.

With repeated references alluded to, with his military title of Lt. for Lieutenant, his role as Vermilion City Gym trainer Gentleman Tucker’s commanding officer in the army during an unspecified war, his declaration that Electric-type Pokémon saved his life during an unspecified war, and a rumour that he was a pilot in America and used Electric-type Pokémon to power his plane.

A number of Fame Checker entries support this:

We can assume that the references to the service with the United States of America, can now be taken as a reference to the Unova region, which was inspired by New York City. This is taken further as a man in black who is found in the Pokémon World Tournament in Pokémon Black and White 2, openly wonders if Lt. Surge was originally from Unova, suggesting retcon of the prior implications that the Pokémon series is set a world similar to our own, e.g. the Kanto region is both named and modelled on the eponymous Japanese prefecture.

This is not just an isolated case, however, the eighth Pokémon movie, Pokémon: Lucario and the Mystery of Mew, shows a historical war between a so-called Green Army and Red Army that was eventually stopped by the efforts of Sir Aaron of Rota, a noble and knight in service to Queen Rin of Cameran Palace. Both of these armies used Pokémon in their forces, thus showing that military conflicts have historical precedence within the Pokémon universe. 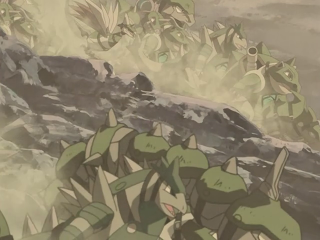 Finally, war is also known to have transpired in the Kalos region. With two distinct conflicts mentioned.

Firstly, the giant AZ, who is over 3000 years old, is known to have left his beloved Pokémon Floette, to go and fight in an unnamed great war.

Secondly, located on Route 6 is the Parfum Palace, a grand palace loosely based on the Versailles Palace in the city of Versailles, in the Île-de-France region, located in the western suburbs of the French capital of Paris.

The Parfum Palace is stated to have been constructed shortly after a war between Kalos and a number of neighbouring regions over 300 years ago, with a plethora of statues displayed within, honouring the people and Pokémon who fought in the unnamed war.

Now, this is where we can speculate further. This aforementioned war is stated to have been with neighbouring regions, and each region in Pokémon effectively seem to function as separate countries.

Alongside this, the Kalos region is inspired by the nation of France, primarily its historical precursor the Kingdom of France and the modern-day French Republic.

Thus we can make the assumption that in parrel to real-world France, Kalos’ neighbours are respectively inspired by France’s neighbouring nations of Spain, the United Kingdom, Germany, Belgium, Luxembourg, Switzerland, Italy, and Andorra.

Now only one is known to exist in the Pokémon universe, that is the United Kingdom as the Galar region.

So the war referenced by the Parfum Palace is presumably inspired by one of the many Anglo-French Wars, which include the following conflicts with the two nations as opposing combatants:

These three conflicts fit the limited parameters we have concerning this historical war involving Kalos and Galar, and all three of these conflicts cover the European continent and included the various historical precursor states of France’s neighbouring countries.

Further, as Kalos has an established nobility highlighted through the Battle Chateau, with the nobility known to include those titled Baron/Baroness, Viscount/Viscountess, Earl/Countess, Marquis/Marchioness, Duke/Duchess, and Grand Duke/Grand Duchess.

So we now also known that some of the regions of the Pokémon universe are either historically or currently kingdoms as opposed to republics, and it is safe to assume Kalos is not the only such region like this.

As the United Kingdom is still a monarchy, although a constitutional one with a democratic parliament, we can assume that Galar is also a monarchy with its own nobility.

Thus, we can assume that this unnamed Kalos-Galar War, which included multiple regions, was primarily a dynastic conflict, like many of the continental conflicts that plagued Europe, just like the Hundred Years’ War between the House of Plantagenet (rulers of the Kingdom of England) and the French House of Valois, over the right to rule the Kingdom of France.

Did the people and nobility of Kalos and Galar fight over the throne of the Kalos region (or even the Galar region)? How long-lasting was this conflict? How many lives were lost? And as it has been shown that Pokémon have been used for warfare before, we can question how extensive was the destruction caused, did any Pokémon become extinct because of this conflict, and did any current or future Gym Leaders and members of the Elite Four see service?

The multitude of questions is vast, and may never be truly answered, but we can speculate. Nonetheless, the introduction of the Galar region may very well mark the development of both the politics and history of the Pokémon universe and how it reflects our own. Kalos and Galar may even still hold animosity between one another, which could be referenced in Sword & Shield, and present a rich opportunity for further expansion of the Pokémon universe’s inter-regional relations and how they are demonstrated.

Copyrighted material used under Fair Use, and belong to their respected copyright holders.